New York Plus Plus The Russian Cultural News

NEVER BEFORE
Walking Tour “Joseph Brodsky and Greenwich Village” (in Russian)
When: Saturday, September 29, 12 noon - ?
Where: Northeast corner of the 3rd Street & Sixth Avenue
Leader: journalist & promoter Natasha Sharymova
Price: $20.00
Directions: Trains A, C, E, D, B to West 4th Street and 1, 2, 3 to 14th Street
All proceeds will benefit the Public Foundation for Creating the Joseph Brodsky Museum in St. Petersburg
This tour is also available individually in English. The tour “Joseph Brodsky in New York” (in Russian and in English) is available individually.
Соntact: 347-450-7583, brodskysociety@gmail.com 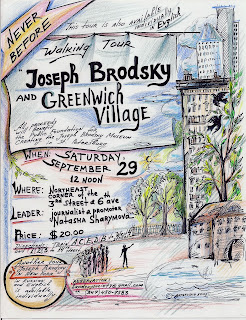 NEVER BEFORE
Walking Tour “Joseph Brodsky and Greenwich Village” (in Russian)
When: Saturday, September 29, 12 noon - ?
Where: Northeast corner of the 3rd Street & Sixth Avenue
Leader: journalist & promoter Natasha Sharymova
Price: $20.00
Directions: Trains A, C, E, D, B to West 4th Street and 1, 2, 3 to 14th Street
All proceeds will benefit the Public Foundation for Creating the Joseph Brodsky Museum in St. Petersburg
This tour is also available individually in English. The tour “Joseph Brodsky in New York” (in Russian and in English) is available individually.
Соntact: 347-450-7583, brodskysociety@gmail.com
Posted by New York Plus Plus The Russian Cultural News at 2:24 AM No comments: 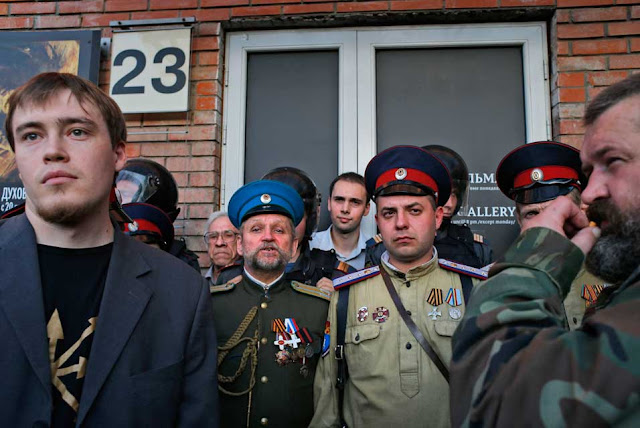 Posted by New York Plus Plus The Russian Cultural News at 11:56 PM No comments:

Film. Israeli Documentary: Dani Menkin & Yonatan Nir's Dolphin Boy (2011)/ JCC in Manhattan
334 Amsterdam Ave., @ 76th St. 1-646-505-4444/ 10:00AM
After being brutally tortured by his classmates, Morad, a teenage boy from an Israeli Arab village, suffers from severe post-traumatic shock and has disconnected himself from the world around him. In a last effort to save his son, Morad's father leaves his job and family and brings Morad to the Red Sea to try dolphin therapy. This documentary is the tale of a parent's patient and tender love and the friendship between a teenager and the group of dolphins who helped him heal. 72 min.
Other. Tickets required. Tatzu Nishi: Discovering Columbus: Visit the Famous Statue Up Close and 70 Feet in the Air, Columbus Circle, Intersection of Eighth Ave., Broadway & W. 59th St. Ticket info: 1-212-223-7800. 10:00AM to 9:00PM.
This major new artwork has been created by the Japanese artist Tatzu Nishi. The work places the 13-foot-tall statue of Columbus in the center of an American living room six stories above the city streets, recontextualizing the historical monument and temporarily transforming it into a contemporary artwork. The room will feature many of the trappings of a domestic living room—lamps, a couch, a coffee table, a television, and more—as well as custom wallpaper by the artist. Through large, loft-style windows, visitors will have dramatic views of Central Park and Midtown Manhattan that will be seen from Columbus’s perspective for the first time.
Pass holders are asked to climb six flights of stairs to a height of 70 feet above street level and to descend by a second set of stairs. Flat, rubber-soled shoes are strongly recommended. This exhibition is ADA accessible. If a visitor requires the use of a mobility device (e.g. wheelchair, crutches, or a cane) or has a condition that prevents him or her from using the stairs, a hoist is available. Visitors under 13 years of age must be accompanied by a parent or guardian. Those between the ages of 13 and 18 may visit without an adult, however a parent or guardian must obtain a pass for them. Given the physical demands of visiting the exhibition, it is not recommended for children under the age of 5. Strollers are not permitted.

Tour
10:30AM
“A Road Once Traveled” Tour
Meet at the Charles A. Dana Discovery Center, inside Central Park at 110th St. between Fifth & Lenox aves
1-212-860-1370
Holding the Park's northern highlands was key in the American Revolution and the War of 1812 because armies could see their enemies approach as they sailed down the East River. History buffs will love this tour.

Workshop
11:00AM
Yoga with Deepti
Mulberry Street Library
10 Jersey St.
1-212-966-3424
This yoga series is ideal for anyone new to yoga and interested in its benefits, this beginner level Yoga class will help you build strength, increase flexibility, and find focus. This class is moderately paced so you will learn the fundamental Yoga postures and principles that create a successful and effective yoga practice. Please bring a towel or yoga mat to class.

Concert
3:00PM
Blues: Rory Block / Heritage Blues Trio
Madison Square Park
, Madison Ave. & E. 23rd St.
1-212-538-1884
Rory Block comes to the stage with more than twenty highly acclaimed releases under her belt and five Blues Music Awards. Block has staked her claim to be one of America’s top acoustic blues women, an interpreter of the great Delta blues singers, a slide guitarist par excellence, and also a talented songwriter on her own account.
Heritage Blues Trio is an inspiring testament to the enduring power, possibilities and boundless beauty of African-American music. Junior Mack is a self-taught and gifted vocalist and guitarist; Bill Sims Jr. a vocalist and multi-instrumentalist and an internationally respected master of blues; and sister Chaney Sims has a voice steeped in field hollers, work songs, spirituals, blues, soul and R&B.

Tour
8:30AM
$3
NYC Marathon Walk
Meet at Fort Hamilton Memorial Triangle, bounded by 4th Ave., 5th Ave. and 94th St. in Brooklyn.
, Leader: Steve Goffner 1-718-275-6615
Brisk walkers only. Will walk most of the Marathon route, starting at 94th St. and 4th Ave., Brooklyn and ending outside of Tavern on the Green in Central Park, Manhattan, including 4 boroughs and 4 bridges. Total distance is not quite 24 miles but there are countless drop-off points. There may also be an optional “off-marathon” extension of the walk. Bring water and lunch (or will stop to buy). Bad weather cancels.

City Walk
Sunday, Sep 23
11:00AM
Historic Orchard Street Tour
Meet in front of Katz’s Delicatessen, E. Houston & Ludlow Sts.
, 1-212-226-9010
Take a historical three-hour journey through the Lower East Side and explore some of the rich history tracing the arrival of immigrants to modern times.

Workshop
2:00PM
Free; RSVP required
Artist Kabir Carter presents workshops and an installation
Governors Island
, Building 110: LMCC's Arts Center
RSVP 1-212-219-9401
After meeting at Building 110: LMCC's Arts Center on Governors Island, participants will be led to Yankee Pier where they will listen to sounds traveling in the air and water enveloping Governors Island. Hydrophones will be used to hear acoustic events within Buttermilk Channel. The channel is a strait, and changes in the channel’s salinity and temperature alter sound’s behavior. Through focused listening, an underwater soundscape will be revealed.

Tour
11:15AM to 4:45PM
Free; reservations can be made up to 90 days in advance
Federal Reserve Bank Tour
Federal Reserve Bank
33 Liberty St., between Nassau & William sts.
http://www.newyorkfed.org/aboutthefed/visiting.htm
Learn about central banking functions that Federal Reserve System performs and see Bank's vault of international monetary gold on bedrock of Manhattan Island, five stories below street level. Learn why Federal Reserve has "Federal" in its name, while it's a private bank, not Federal at all. Congressman Ron Paul considers the Federal Reserve "both corrupt and unconstitutional"
Tour times: 11:15 a.m., 12:00 p.m., 1:15 p.m., 2:30 p.m., 3:15 p.m., and 4:00 p.m.

Jazz
12:30PM
Yuka Aikawa, Jazz Pianist
Bryant Park, Upper Terrace
, Sixth Ave. & 42nd St.
1-212-768-4242
Pianist and composer Yuka Aikawa began playing piano at the age of five in her native country, Japan. She studied at the Aaron Copland School of Music at Queens College, where she received her M.A. in jazz performance under the guidance of Sir Roland Hanna and Jimmy Heath. During this time, she received the prestigious Michael Feinstein Award for "Outstanding Talent." (photo: Yukio Yanagi)

Dancing
6:00PM to 9:00PM
Park Square Dance
Bryant Park, Fountain Terrace
, Sixth Ave. & 42nd St.
1-212-768-4242
Square dance hits the big city. Do-si-do and promenade at a dance party like no other, with a whole lot of country food, music, and fun to midtown.
- Live Appalachian music
- Follow the calls of Dave Harvey from NYC Barn Dance
- Down-home fixings and drinks by 'wichcraft
- Ticket giveaways from Southwest Airlines
Country festive attire welcomed. No experience or partner necessary. They'll pair ya up and teach ya the steps. All dances taught all night.

Party
6:30PM to 9:00PM
Tribeca Meet & Greet
Dance New Amsterdam
280 Broadway, entrance at 58 Chambers St.
1-212-220–1450
Start the autumn with a get-together celebrating Lower Manhattan neighbors and an ever-growing always changing community.
If you have never attended a Tribeca Meet and Greet, now’s the time. Exchange some ideas, do some networking and have a drink with the neighbors. Some people show up for the full evening, some just drop by to say hello. Frankly Wines has kindly provided some beverages; MaxDelivery will bring some nibblybits. The Downtown Express will raffle off an ad and T-shirts.

TUESDAY, SEP 25
Jazz
12:00PM
Dixieland Jazz with the Gotham Jazzmen
Library for the Performing Arts
40 Lincoln Center Plaza
1-917-275-6975
The Gotham Jazzmen bring you all your old favorites and more.

WEDNESDAY, SEP 26
Workshop
10:30AM
Free; registration required starting 9/19 at 1pm
Cell Phone Buying Guide 2: Smartphones
Mid-Manhattan Library
455 Fifth Ave., at 40th St.
Registration info 1-917-275-6975
This will be a Lecture/Demonstration. Phones aren’t just phones anymore. Learn about the latest cutting-edge smartphones, their various operating systems, the required data plans, and the many available applications (apps!) that can turn a good smartphone into a great one. Online registration begins Wednesday, September 19 at 1:00pm. This class takes place on the 4th floor from 10:30am - 12:30pm.

THURSDAY, SEP 27
Birdwatching. 8:00AM. Birding Tour of the Park. Bryant Park, Sixth Ave. & 42nd St. 1-212-768-4242
Discover the varieties of birds that call the Park home during the migratory season with guided tours.

Concert. 1:00PM. Chanell Crichlow, Tuba Player. LMCC's LentSpace. , intersection of Canal St. & Sixth Ave. 1-212-219-9401.
Chanell Crichlow is a native New Yorker who spent most of her childhood on the island of Trinidad and Tobago. From a young age Crichlow was aware of the power of music and soon gravitated to the tuba as her first instrument. As a teenager, she attended both the Manhattan School of Music Prep and The Juilliard Schools’ Pre-college division. She founded the Sakura Brass Quintet in 2004 and in 2007 was selected to the National Orchestral Institute.

Concert. 7:00PM. Sex Mob, Legendary Downtown Band. World Financial Center, 220 Vesey St., bet. West St. & North End Ave. 1-212-417-7000.
In celebration of the opening of The Sweet LIFE exhibition, the legendary downtown band Sex Mob takes on the music of the great Italian film composer Nino Rota, frequent collaborator of director Federico Fellini. Rota scored all of Fellini’s films from The White Sheik (1952) to The Orchestra Rehearsal (1979), and won the Academy Award in 1974 for the score to The Godfather.
Led by trumpeter and bandleader Steven Bernstein since 1995, Sex Mob is a rare group that has created its own sound, a completely unique language combined with the telepathy that musicians cultivate over years of playing together. Grounded in jazz but marked by a dazzling versatility, their repertoire can range from Nirvana to Prince, Bond to Basie, and everything in between.

Workshop
7:30PM
Journey to the Stars with the Amateur Astronomers Association
Brooklyn Bridge Park
, Pier 1, Promenade
1-718- 222-9939
Join astronomers as they guide your eyes across the sky and the wonders of astronomy are revealed. Look for the Syfy telescopes.

Concert. 7:30PM. Stevy Mahy, Singer-Songwriter. Lincoln Center, David Rubenstein Atrium, Broadway between 62nd and 63rd Streets. 1-212-875-5000.
Float away on the enchanting voice of Stevy Mahy whose lyrics flow seamlessly over rich acoustic melodies that envelop and warm the soul. Growing up in a musical household, she spent her time between her birthplace, Paris and Guadeloupe. Stevy's music is distinctly influenced by her global childhood. Singing in English, French, and Creole, her hushed tones and intimate style are complemented by the hints of Caribbean rhythm.

Posted by New York Plus Plus The Russian Cultural News at 6:21 AM 1 comment: